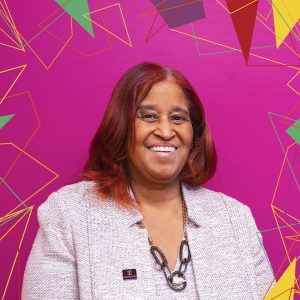 As President of Youthprise, Wokie Weah provides executive leadership and vision, works in partnership with the board of directors and brokers relationships to reduce disparities with and for Minnesota youth. In 2016, Wokie was recognized as one of the “(Real) Power 50” by Minnesota Business Magazine and was recently awarded the Annual Community Leadership Award from the Charities Review Council.

Wokie is a champion for young people and under her guidance, Youthprise has become recognized nationally for its leadership in youth engagement and youth philanthropy. In 2016, Youthprise piloted the international youth-giving model, YouthBank, with 8 sites in the state of Minnesota and plans to expand nationally. Throughout her career, Wokie has upheld and promoted values around youth leadership, racial equity and reducing disparities.

Prior to joining Youthprise, Wokie worked for 18 years at the National Youth Leadership Council; serving as Senior Vice President. In that capacity, she helped shape the organization’s strategic direction, cultivate partnerships, grow the funding base and managed NYLC’s youth and school programs, professional development, an annual conference, and special events.

For part of that time, she also worked for UNICEF as an Education Project Officer in Liberia, where she coordinated the Support to War-Affected Youth Project, the Juvenile Justice Initiative, African Girl Education Initiative, and Child-Friendly Spaces for internally displaced children.

Wokie received her Master’s degree in Education Administration from the University of Wisconsin-Milwaukee and her Bachelor’s degree from Adelphi University in New York. She is an author and widely-traveled speaker; she has addressed audiences throughout the United States and Africa and written extensively on service-learning and diversity. She is a native of Liberia, is married, has five children and 10 grandchildren.

Guiding Quote: “In the experience of myself, I would be wise, if I were a great scholar” – Michel de Montaigne