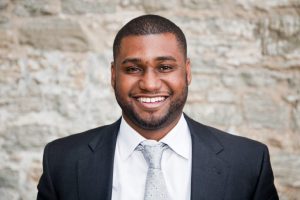 Marcus Pope, Youthprise’s President, works closely with the Board of Directors to execute Youthprise’s strategic priorities. He provides oversight for all organizational areas including grantmaking, policy advocacy, communications, development, and special initiatives. Having joined Youthprise in 2011, Marcus has been an integral part of Youthprise’s success as he has formed key partnerships with nonprofits, government agencies, and grantmaking entities to create opportunities for youth throughout Minnesota. Growing up in Saint Paul’s Frogtown Neighborhood, Marcus benefitted from high-quality child and youth development opportunities at the Hallie Q. Brown Center and the Science Museum of Minnesota. These experiences and opportunities – along with the poverty, community violence, and inequity he witnessed throughout his childhood – inspired him as an adolescent to pursue a career in youth development. He began his tenure with Youthprise as Director of Strategic Initiatives and Outreach, joining the organization at its inception and serving on the founding leadership team. In 2017, Marcus was promoted to Vice President.

Before joining Youthprise, Marcus served for five years as Associate Director of the Institute on Domestic Violence in the African American Community (IDVAAC) at the University of Minnesota (U of M). While there, Marcus oversaw targeted fundraising efforts, educated national policymakers and White House staff on federal legislation that addressed intimate partner violence, and helped develop and implement technical assistance to service providers in 20+ jurisdictions nationally. Marcus’ time at IDVAAC is marked by a 39% increase in revenue, an elevated national profile, and significant program expansion. Without formal education and training in legislative advocacy, Marcus credits women of color leaders in the domestic violence and sexual assault movement for providing him with the advocacy knowledge and tools he would later use at Youthprise. Other experiences include serving as Director of Youth Programs for the Neighborhood Involvement Program in Minneapolis and Academic Advisor for the Youth Studies Department at the U of M School of Social Work.

A respected leader in the Twin Cities’ nonprofit community, Marcus has served on several boards and committees. He currently serves a Vice Chair of the Minnesota Council on Foundations board of directors. He also sits on the boards for the Mardag Foundation and the Andrus Family Fund, a grantmaking entity affiliated with the New York-based Surdna Foundation. Marcus was also recently elected a Trustee for Wallin Education Partners. Additional civic leadership and involvement include his current service as Trustee for the Friends of the Saint Paul Public Library, Co-chair of the Saint Paul Promise Neighborhood Community Council, and member of the Dean’s Advisory Council for the U of M College of Education and Human Development (CEHD).

In 2020, Marcus received a Minneapolis/St. Paul Business Journal’s 40 Under 40 Award for his leadership and service to the Twin Cities community. He was also selected as part of the 2018 Twin Cities cohort of the coveted Harvard Business School Young American Leaders Program. And in 2013, he was honored as a Rising Alumni of the U of M’s CEHD. Throughout his career, Marcus has authored or co-authored several published works, including journal articles, commissioned reports, and book chapters that address youth engagement and leadership, education, and intimate partner violence.

Marcus earned an interdisciplinary undergraduate degree in Sociology, Youth Studies, and African American studies and a Master’s degree from the U of M in Education – Youth Development Leadership, with an emphasis in Program Evaluation. He also holds a Mini-MBA from the University of St. Thomas’ Opus College of Business.