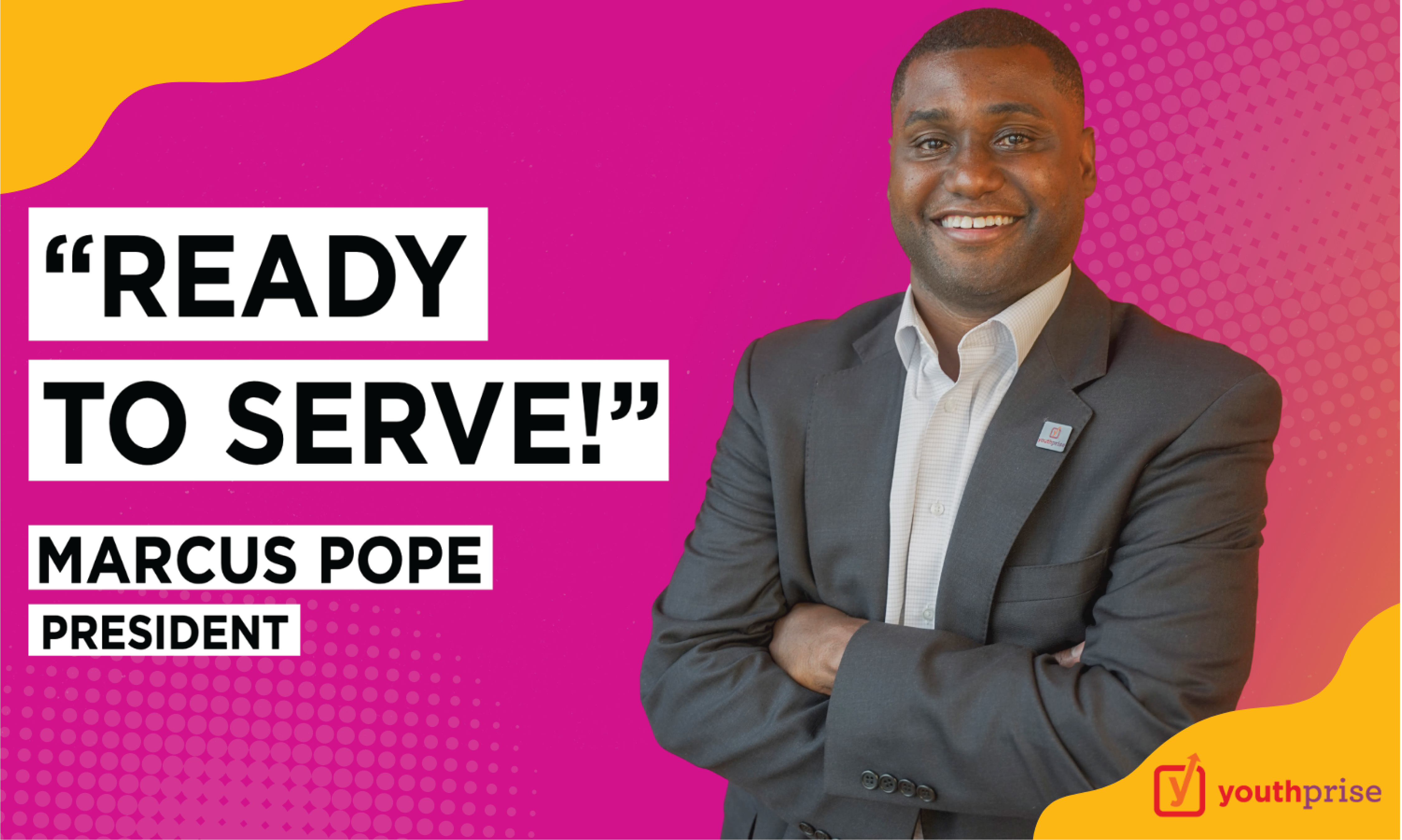 A Statement from the NEW Youthprise President, Marcus Pope

As I experience my first days as President of Youthprise, I think back to nearly two decades ago, when I was sitting in the Minneapolis Convention Center in a room filled with cross-sector leaders to discuss the release of Mind the Gap. For those who are not familiar, this report highlighted racial and ethnic disparities in the Twin Cities region and the negative impact of such disparities on our regional competitiveness. Two things struck me at that moment. First, as someone who entered the non-profit sector because of the disparities and inequities I witnessed growing up, I was energized by what I saw and heard. I felt blessed to be entering the sector at a time of radical change for the better. Second, as a young black male, I saw another Black man on the dais who was President of the Minneapolis Foundation. He was challenging business leaders, government officials and non-profit executives (mostly white) to act and it seemed as if they were actually listening. It was at that instant that I decided I wanted to work in philanthropy.

A few years after that convening, I completed my Master’s degree and transitioned to work for a national research and outreach center at the University of Minnesota. I spent over five years doing national work, keeping a suitcase packed while working in communities from coast to coast. I had developed what I believed to be first-rate experiences that included: shifting and developing national policy; co-authoring scholarly publications; and providing training and technical assistance to professionals in jurisdictions across the country, including non-profit professionals, clergy, judges, government leaders, law enforcement and advocates. I also worked closely with high-level public officials and national foundations to influence administrative practices and national grant programs. After several years of doing national work, I was ready to return professionally to my hometown and give back to the community that sparked a desire within me to dedicate my career to making a difference. A decade had passed since the Mind the Gap report, and my assessment was that although we were fighting hard to address local inequities and had some promising endeavors, our collective efforts were just not good enough. I wanted to become a more direct contributor (along with countless others across sectors) in the fight for the soul and prosperity of my community.

The challenge with this decision was that I couldn’t find a job. I especially couldn’t find a job within philanthropy. First interview, rejection. First and second interviews, no luck. First, second and third interviews, not a good fit. Eventually, I found Youthprise, which, at the time, was physically housed within the McKnight Foundation and called OST Minnesota. Wokie Weah, the founding President, seemed quite intrigued by my experience and skillset during the interview process. From day one, she embraced and supported me as if I represented the future of what would become a fully formed Youthprise. I had found a home to serve my community, as well as unrelenting support and guidance in doing so.

In my first official statement as President, I would be remiss not to acknowledge Wokie’s remarkable leadership and the road she was led to pave for me at Youthprise. I realized that my time at Youthprise would not be the most expedient route toward wealth and recognition. Instead, it would place me on a path toward something far more meaningful. I know wholeheartedly that my 10-year partnership with Wokie has positioned me to make a real difference – not only through programs and services but by pushing systemic and structural change that will have a lasting effect for young people and families – now and for future generations.

Under Wokie’s leadership, Youthprise has realized several accomplishments. Here are some highlights:

-         Raised and distributed nearly $50 million to support youth development initiatives statewide, emphasizing support to organizations led by people of color and small organizations that were doing excellent work but their growth was stifled because they lacked financial support from institutional funders;

-         Sparked unprecedented engagement of youth on boards, advisory structures, as well as youth engagement in policy, philanthropy and research. This includes partnering with the City of Northfield to grow the number of young people on Mayor-appointed boards and commissions to over 90, leading to the first-ever person of color elected to the City Council;

-         Responded to the COVID-19 pandemic by providing millions in emergency grants, distributing over two million meals to children and youth, deploying over 1500 laptops and enabling thousands of hours of private tutoring to be provided to low-income children to combat learning loss; and

-         Successfully sued the state for denying young people federally funded unemployment benefits, resulting in an over $30 million payout to youth throughout every corner of Minnesota; and

-         In 2021, worked with a coalition of youth and adults to change a discriminatory state unemployment insurance law dating back to 1939.

We will share more accomplishments during Wokie’s tenure in the coming days. As someone who has held a front-row seat throughout Wokie’s leadership journey, her survival strategies as a woman of color and immigrant confronted with a nearly impossible task were amazing to behold. For me, this journey has been priceless, and I wouldn’t trade it for anything. It is an honor to build on her legacy, and what a challenge it will be!

As I assume this role, one thing is clear: Now is the time to double down on our commitment to young people and leveling the playing field so that all youth thrive and, in turn, Minnesota can thrive. This is a critical moment where we are presented with tremendous challenges and significant opportunities. The urgency of the times requires us to be enterprising, think bigger and bolder, and exercise great courage. Wokie would expect nothing less. Our first ten years were about championing Equity, increasing Opportunity and leveraging the Voice of young people. It is my vision that the next ten will be about Ownership, Wealth and Power.

It’s been nearly two decades since I sat in that convention center ballroom – full of hope, optimism, and resolve. These qualities remain in me today because of the ingenuity and passion I see in Minnesota's young people. What I know – and more importantly, what theyknow – is that we can’t afford another 20 years of not good enough. I am READY TO SERVE in this new capacity. Youthprise’s journey is not over, and there’s room on the path for others to carry on this work. We invite you to continue with us in the journey ahead.