Dr. Joseph White is known as the “Godfather of Black Psychology.” At Youthprise’s first annual Black History Month Philanthropy Breakfast, co-sponsored by the African American Leadership Forum and Minnesota Blacks in Philanthropy, Dr. White addressed funders and stakeholders with a humorous message on the seven principles of Black Psychology. Starting with a story on how he could have been the father of Minnesota music legend, Prince, Dr. Joseph White kept the audience laughing and engaged throughout his keynote address.

Jamela Pettiford’s powerful performance of A Change is Gonna Come by Sam Cooke left the audience at Youthprise’s 2013 Philanthropy Breakfast in awe.

Brittany Delany’s spoken word performances at multiple Youthprise Black History Month celebrations left audiences giving church-like responses like “yass” and series of hand waves and snaps. In one of her first performances at Youthprise’s Community Forum in partnership with the Cultural Wellness Center at Sabathani Community Center, Brittany left the audience with a powerful statement of intergenerational progress. In her performance she says, “You ask why I take this route, because it chose me. Because every time I try to act like the push from behind me wasn’t there, I hit the ground trying to carry the weight from the façade. This, I do it because there is too much before me and too much after me to pretend like I don’t see the hands of ancestors lying like angel wings, interlocked with the still of revolutions, holding my feet up from birth, whispering the name of those whose lives my chest inhales air for now.” 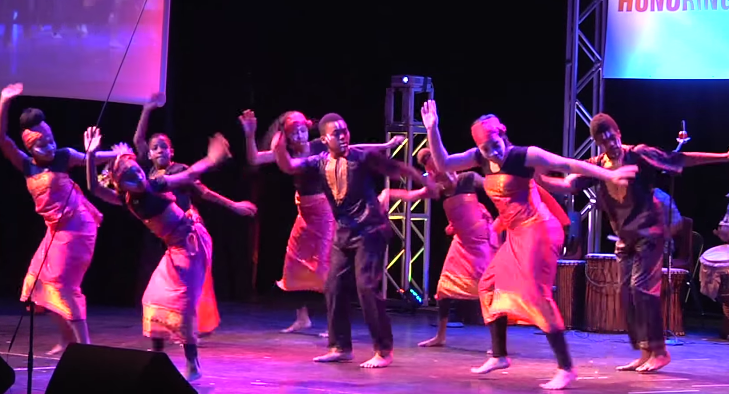 Moving to an ensemble of drums, students of WISE Charter School celebrated Black history through flawless performances at the 2013 and 2014 Community Forums hosted by Sabathani Community Center and Central High School.

Maasia Si-Asai’s monologue as Gordon Parks was spot on. With a suit and tie, a dapper Si-Asai portrayed the legendary photographer and walked us through the life and accomplishments of Gordon Parks at the 2013 Community Forum.

Hosted at the Minnesota African American Museum in 2013, Mahmoud El-Kati and Dr. Joseph White held an intimate conversation with a group of young people. Mahmoud El-Kati and Dr. White shared stories of growing up as young black men in America. One young person asked, “Why are we hating each other for being different?” Dr. White responded, “It’s hard to grow up in America and not internalize some of what you hear and see. So if you grow up in America and they say Black people are bad… even though you’re Black and you hear that, some of it sticks in your mind.”

Watch the full performance below

Sounds of Blackness have been a staple at every Youthprise Black History Month Community Forum. Delivering an uplifting series of performances, Sounds of Blackness have found meaningful ways to integrate young people on stage. In past celebrations, they performed with students of the Coon Rapids Gospel Choir and students of Carter G. Woodson Academy.

In 2015, the Community Forum featured keynote speaker, Dane Verrtah, with the theme, #BlackYouthMatter. Verrtah delivered his keynote in the form of a spoken word piece dedicated to his father. His theme centered on this repeating phrase, “We don’t just liberate people from chains, our blackness shifts the arch of humanity.”

Naomi Tutu was the keynote speaker at the 2014 Community Forum. Naomi Tutu is the daughter of human rights champion Archbishop Desmond Tutu and an international speaker on race and gender justice. In her keynote she exclaimed, “We are going to make sure that our politicians in this country know that their positions on Africa are as important to us as their positions on our domestic policy.”

Thousands of #Minnesota high school students have lost their jobs because of #COVID19, but a 1939 law means they don't qualify for #unemploymentinsurance. Contact your legislators and urge the #mnleg to pass a temporary fix this special session: bit.ly/3fr3zek

It's hard to believe that in July 2020—more than 80 years after the law was passed—we are having this conversation. Minnesota legislators have an opportunity this week when the special session convenes to provide these students with the money they’ve earned.

Lawmakers from both parties are working on a temporary fix that would make high school students ages 16+ eligible for the same unemployment assistance a non-student worker in the same job would receive. These are youth who have been part of the workforce and whose employers have already been paying into the system for them.

Many think of high school jobs as a source of “pocket change” for going to the mall or hanging out with friends. This perspective overlooks the very real inequities faced by the working poor and lower-income folks across our state. The reality is that many Minnesota high school students rely on these wages to support basic needs like food, rent, and utilities and are a vital part of their family’s household income. Access to unemployment benefits is about survival for everyone, not just those no longer in high school.

Here are just a few of the stories of young people impacted by this unequal law:

Carlos is an 18-year-old student who suffers from myelogenous leukemia. He depends on daily chemotherapy treatments to keep him alive and well. Because he lost his job and doesn’t qualify for unemployment benefits, he currently can’t afford the medication.

Walter is 17-years-old and worked for several years at a carwash before being laid off because of COVID-19. He used the money he earned to support several family members including his mother, younger brother, and aunt.

Kasey is one of the many high school students from Greater Minnesota who lost her job because of the pandemic. She used her wages to help her family pay the bills while trying to save some for college. Now, she’s left with no income because she was denied unemployment insurance.

Cole, an 18-year-old, applied for unemployment benefits before graduating from high school and initially received a check for $3,700, which he promptly used to pay for bills that were due. When the state discovered he was still a student at the time, they sent him a letter demanding the money back.
If these students lived in nearly every other state, including Iowa, North Dakota, and Wisconsin, they would be eligible for either state or federal benefits. Minnesota’s law is especially punitive because it not only makes high school students ineligible for state unemployment benefits, but the Department of Employment and Economic Development has ruled that it also prevents high school students from receiving federal Pandemic Unemployment Assistance (PUA).

If these students lived in nearly every other state, including Iowa, North Dakota, and Wisconsin, they would be eligible for either state or federal benefits.

An inspiring group of youth behind the Don’t Forget Us Campaign have been leading the advocacy effort on this issue from the very start. This week, legislators have an opportunity to come together and provide equal treatment for the many enterprising high school students in our state who have lost their jobs because of a global pandemic. These students have been waiting for months—it’s time to give them the benefits they’ve earned.

You can help by going here: docs.google.com/document/d/1VqE7nqVRykDT3Bkf7C3uD2DYLRUu7ZBxtHnJBSLqXPg/edit and contacting your local legislators. Urge our leaders to take action and stand up for youth and all Minnesota’s families!